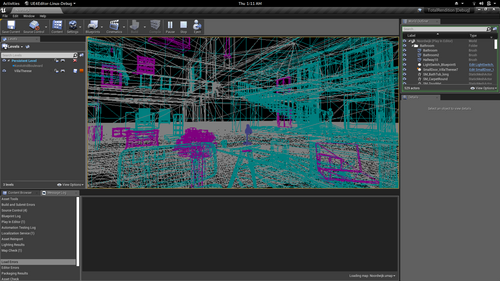 As Biden won the elections (congrats - just hope congress will not attempt to miscount the votes on purpose!), Cyberpunk 2077 has hit the shelves, in a manner of speaking at least; And I look forward to playing it! Once it is more polished that is, for Cyberpunk 2077 has quite a bit of problems as documented here: https://www.washingtonpost.com/video-games/2020/12/15/controversies-cyberpunk-20...

Right now, that is, at the time this devlog entry was published, Total Rendition is still a very obscure game few have heard of, that is only available on a gaming content platform with a market size that dwarfs that of Steam. Yet, there are already extant playable versions available.

Once Total Rendition finds someone stupid enough (just kidding of course!) to fund its production, I intend to approach the scale and size of Cyberpunk 2077, to the extent reasonably possible... Except for the bugs and game-breaking issues which are going to be a lot smaller, hopefully. Giving out playable versions early on in development, when most developers would only bother to release concept art, gives you, the player, insight how Total Rendition is developing. By the time the real thing comes, it will be finely polished.

Cyberpunk 2077 appears to be magisterial: So large in its scale and scope that most players will not even bother to check out all its content. Needless to say, while I hope Total Rendition will one day have the scale and size of Cyberpunk 2077, I have purposefully limited the scope within certain parameters, however: It will focus on its plot, its characters and its setting and avoid getting meandering. Intensity is better than extensiveness.

It's done when it's done. As its originator John Carmack abandoned it, it has instead been adopted for Total Rendition from the very beginning of TR's development. Or to put it differently, better late than shoddy.

Once variables can be properly stored across levels, I'll call the next prototype Total Rendition 0.1.1.1. The full version of Total Rendition coincides with version 1.0.0.0 (which will not be released sooner than 2022 and probably later, it's done when it's done after all), yet I have noted that in terms of gameplay mechanics, Total Rendition is actually far more closer to feature complete than I had previously thought. Thus, revision numbers will take bigger leaps from now on, although actual development pacing is as fast as it normally is: I have just been too conservative with revisions, making development appear slower than it actually is.

To actually develop Total Rendition will require lots of funds: Right now, it is only made by a rag-tag team of collaborators who joined because they like the project first and foremost, involved on an on-and-off basis, with me being the driving force. However, this will not be the way the final version of Total Rendition comes to be, unless capitalism will collapse soon, which it may very well not. Indeed, while fun, this mode of development is not sustainable in a capitalist society: At the end of the day, people still will need to pay tribute to their landlords or pay off their mortgages, while food is generally not available on a to-each-according-to-his need basis, unless you are willing to risk shoplifting or, even worse, accept getting humiliated by church charity.

Thus, Schizotypy needs a hustler, someone able to convince (or hoodwink?) investors, so Total Rendition, true to its underlying intentions, becomes feasible in a capitalist society as well - and not just in the Catalonian dream that I personally fancy. The long-awaited Mac-debut of Total Rendition already had to be postponed due to Schizotypy's ongoing undercapitalisation. The Total Rendition devteam, whose back is covered by Schizotypy, is essentially like Banksy and Rage Against the Machine: Anti-capitalist, yet at the same time able to stay afloat within capitalism: Through Schizotypy, the Total Rendition devteam has set its sights on infiltrating the start-up scene as part of a direct action campaign against capitalism!

If you wish to join up to work together with me to that end, reach me at biz@schizotypy.com