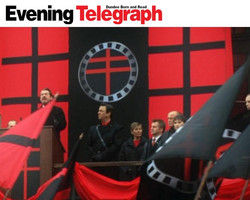 To whom it may concern,

Before, I set out to detail my concerns, this letter should not be interpreted as yet another request to IPSO for review of the Evening Telegraph's articles covering the McStalking case. Indeed, I have no hope that if I had made such a request for review again, IPSO would have processed such in good faith anyway. Instead, I will take the opportunity to comment on the situation instead.

In my view, IPSO's handling of my complaints about the Evening Telegraph's coverage of the McStalking case, have clearly showcased how farcical IPSO is as an institution. Indeed, it seems to exist, solely, to protect the good name of the media outlets which are purported to abide by IPSO's standards. Indeed, it is quite telling that many UK news outlets with a reputation for quality editing, are not members of IPSO. Indeed, many of IPSO's members have a reputation for yellow journalism, the Evening Telegraph included. Hence, in hindsight, I should not have been surprised about IPSO's unwillingness to perform its putative duties.

The Evening Telegraph's articles which involved me, all of which (at least at the time) were about the McStalking case, and all of which I have found to have objectionable content, insinuatingly endorsed the Crown Office's position. At the same time, these articles made a false pretension of neutrality. This is EXACTLY the kind of reporting, which prompted Caroline Flack's suicide, to name one example. Of course, in that matter as well, IPSO was nowhere to be found either.

The Evening Telegraph's coverage of the McStalking case, would not have been misleading if the Evening Telegraph did not pretend to be objective or, conversely, tried to cover my viewpoints in greater detail. For instance, if they used headlines such as "Outrageous not guilty plea by creepy EU-stalker", it would be derogatory, inaccurate, opinionated and insulting. Yet despite all of that, in this example, the Evening Telegraph would also have clearly set out the position it has taken in regards to the matter, rather than attempting to hide their bias behind a facade of purported objectivity. Alternatively, they could have attempted to solicit my viewpoints, in order to be genuinely even handed. Yet, the Evening Telegraph has done neither things, leaving the worst of both worlds instead.

Instead, it has given more detailed coverage to the prosecution's position, which I believe is motivated, not by a genuine desire to deliver justice in a way that is not prejudicial to everyone's right to due process. Many of the crown office's claims appear to be fabricated. I have also been remanded for two months on two separate occasions at HMP Perth, with the McStalking case used as a pretext. However, the Evening Telegraph seemed dead-set on presenting the prosecution's claims at face-value. "Journalism" that cheers on government overreach isn't journalism, it's propaganda.

Given that I was forced to leave Dundee in part following abuse on the streets I had experienced, in all likelihood due to the publication of the Evening Telegraph's articles in question, I would also argue the moniker "Dundee Man" is misleading. Instead, it arguably serves no other purpose other than covering up the damage the Evening Telegraph helped aggravate. However, if I am not mistaken, IPSO's putative duties are exactly to prevent these things from occurring. Well, if that actually is the case, it failed. Although IPSO probably succeeded, at least for a brief while, in keeping the Evening Telegraph away from scrutiny.

I believe the true reason behind the prosecution may be to conduct sabotage on Total Rendition, a video game I have been developing since 2018. This is circumstantially supported by the fact the putative "victim", at the least at the time, worked at Dundee Contemporary Arts. Furthermore, following a Freedom of Information request I had made before the Home Office, it has been suggested by my legal counsel that the putative victim, who filed the criminal complaint leading to the McStalking case, may actually be an employee of a Home Office agency such as MI-5 or the London Metropolitan Police instead.

It should be said Total Rendition is not devoid of political content, as it is intended to serve as a question mark regarding the ever-growing political power of the populist right. Far from advocating censorship, I have instead been on the receiving end of inaccurate reporting which glorifies censorship. If I were to be wrongfully convicted, the Evening Telegraph will for a large part be at fault. Indeed, it is my fear that the Sheriff handling the case may not be willing to pass an independent verdict out of fear of getting attacked by the Evening Telegraph. Isn't IPSO supposed to make sure that these scenarios remain in the realm of the unthinkable?

One should also note that, contrary to the Evening Telegraph's insinuations, I reject all instances of sexism and condemn all forms of violence against women. By contrast, as just a man I am more than willing to endorse third-wave feminism. Furthermore, on a related note, I would describe the overall ideology of the Evening Telegraph - and most of DC Thomson's publications, in fact - to be related to the Populist Right and/or Alt-Right. In the Evening Telegraph's case, this is thinly disguised as objectivity. By contrast, I make no pretension of objectivity and instead, I merely try to argue for, or promulgate, my viewpoints in an appropriate manner.

Thus, in conclusion, I see no other option other than directly attacking the presumptions made by the Evening Telegraph, which I have just done, in words. That, as well as IPSO's pretensions to be an "independent" watchdog, which in my perception, it evidently is not. And in the absence of appropriate action by IPSO, I'll just settle with writing that David Wren and Ciaran Shanks can both suck my motherfucking dick.

Thank you for your email. I appreciate you may have found the result to be disappointing, however you have reached the end of the process with IPSO and there is no further way to appeal.

Total Rendition is the Game they don't want you to Play! A post-truth political conspiracy awaits...